I am fascinated by tilt shift photography and for a while now I have been Photoshopping my photos to give them the miniature look and have got it down to just a couple of minutes.

I recently saw a DIY tilt shift lens somewhere and that was it, I was hooked and determined to build one myself! After hours of research, looking into what lens would be suitable I was slightly ‘frustrated’ with my progress and mainly with the price of the lenses which I knew would work.
I have a Nikon DSLR which has a register distance (A.K.A; registration distance / flange focal distance) larger than most common camera makes, this is the distance the lens is designed to be from the sensor (originally film). Basically Nikon lenses can be mounted on other cameras such as Canons very easily with a simple adapter, unfortunately not the other way around. In order to focus the image with the lens further away from the sensor (requirement to be able to tilt the lens) you need a lens that was designed to fit a camera with a larger register distance. This way you can focus simply by moving the lens closer or further away from the camera as it has originally been designed to be further away than the the cameras standard lenses.
Another important requirement for the lens you are looking for is that it was designed for a larger film format, so that the image circle is much larger than your sensor/film.
Imagine if you used a lens designed for a smaller format on a larger format camera, the result would be a heavy vignette, so much so the there would only be a round image on a black rectangle. (this is taken using a c mount lens similar principle)

Sensor crop, as a side note you can also see that a larger format lens will work as a macro lens

Having this larger image gives you lots more room to move (shift) the lens around and not cut off the image.
I shall not go in depth on the technical details on this as this information is already out there (and it is still a little confusing to me) and easy to find now you know what to search for.

Anyway I had finally settled on a lens in the region of 70€ but still thought this is a little pricey for a project which I could not completely guarantee would work also the lens was not very fast (F4). So I was ready to give up and forget the idea as I was getting sick of reading about bloody flange distances and format sizes!
However something great happened today, we decided to go and have a wander around at the local car boot sale here near my Mums house and at the first set of stalls we came to I spotted an old slide projector! After my many hours of research, I read about using enlarger lens to achieve the DIY tilt shift, so I thought that this lens must work on the same principles. I took a closer look at the lens on the projector and BINGO, I was pleased with what I had found.

Being a faster lens with a fixed aperture of 2.8 I was delighted with my find.
Next haggling!
The thing was I didn’t want a huge old slide projector that I didn’t need nor think of a use for. Fortunately for me the whole projector was only £2! I gave the stall holder the two shiny (and quite unfamiliar to me now) pound coins and left him with the projector to try and sell!

When we got home I tried ‘free-lensing’ (not before devouring a Lincolnshire sausage roll), I was very pleased with the results. I really didn’t think that holding a lens up to the open body and opening the shutter would result in a usable photo, mainly because light can enter the camera through the gap, how wrong I was!

So doing my best to cover the gap while holding the lens up to the camera I tried a few test shots.
First of all… it works! I had a clear image, not too cropped and I could focus by moving the lens closer or further away, mission accomplished, I had a lens that I could use for tilt shift photography!
I am still getting to grips with the relationship between the tilt and shift movements and how they affect the focus plane and perspective, having only played with it for 10 minutes I can’t expect to be a tilt shift expert!

Here are some initial ‘free-lensing’ results: 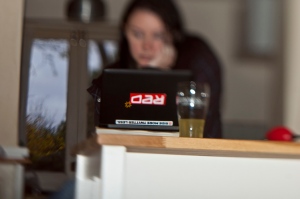